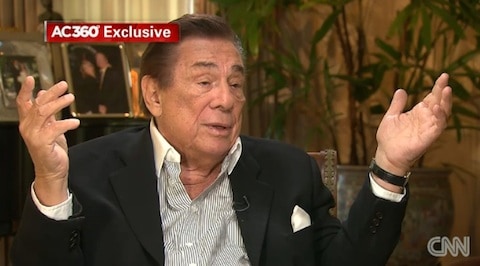 Donald Sterling's former mistress/girlfriend V. Stiviano is now claiming that the ex-LA Clippers owner is gay and that she served as his "beard" for three years prior his wife Shelly Sterling filing a lawsuit against Stiviano.

In response to Shelly's lawsuit, which accuses the model mistress of taking $1.8 million from the Sterling Family in gifts for sexual favors, Stiviano says that she “was not ever a sexual partner” of Donald.

In documents filed in Los Angeles Superior Court on Aug. 9 obtained by TheWrap, Stiviano said that Donald is “homosexual and enjoys sexual and or sexual congress with males” and that she acted as his “beard.”

Additionally, the documents state that Shelly knew and “condoned” her husband's “sexual orientation” and approved “gifts of money and or properties” to Stiviano for acting as his beard.