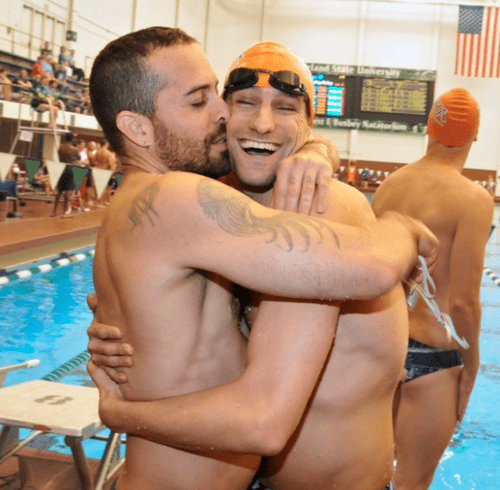 (photo by brent mullins; photos below by cyd zeigler)

The Gay Games bill themselves as the “games that change the world.” This week in one of America’s most purple states, they certainly changed Northeast Ohio.

Outside of religion, sports are America’s most powerful cultural force. For a sports town like Cleveland, where conversation about the Browns’ quarterback battle dominates the news, the Gay Games were the perfect tool to make inroads into the hearts and minds of Ohioans. 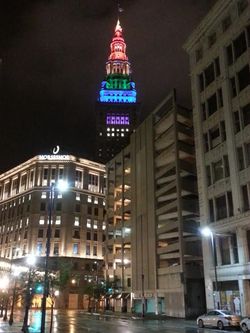 Certainly this Gay Games was smaller than any since 1986. While organizers claimed in the neighborhood of 7,000 registrants, participants at virtually every sport reported drastically smaller competitions than years past. If I had to make a wager, my best ballpark guess would put the number of actual competitors around 5,000. That’s quite small for the Gay Games.

Yet the event’s ability to affect change in this bellwether state was not diminished. You only had to walk through downtown, or even Little Italy several miles from the festival village, to see rainbow flags where you might not expect them. The power of the pink dollar was seen with rainbows plastered across seemingly every business from hot dog carts to Starbucks, from taxi cabs to the Cleveland Indians. Tower City Center, an iconic Cleveland landmark, was lit like a rainbow every night for the whole city to see.

Yet the loudest rainbow flag was likely the smallest: a rainbow sticker on the bumper of a police cruiser parked outside the Renaissance Hotel, the de facto center of these Games.

I made it a point all week to talk with the police officers across the city. They were in full force patrolling the swimming venue, on horses at rowing, with the bomb unit at track & field. They couldn’t have been friendlier, almost like a welcome committee in blue.

“We just want everyone to be safe,” said one cop whose K-9 Benny stole the show at the festival village. “We don’t want anyone to get hurt.” 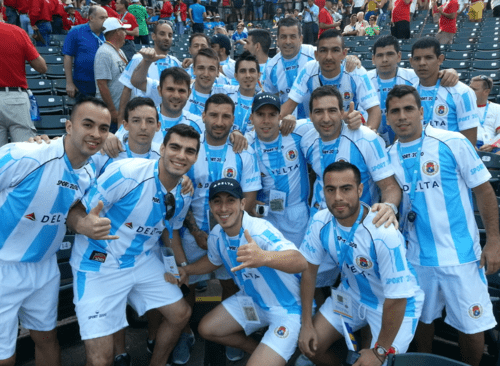 The modern gay rights movement started when police raided the Stonewall Inn intent on rounding up a bunch of queers and drag queens in New York City. Forty-five years later their only concern in Cleveland was making sure no one bothers us again.

These Games also brought outreach to two of America’s biggest hurdles in the race for equality: The Christian Church and the GOP. The United Church of Christ was the first denomination to sponsor the Gay Games, and they did it at a high (silver) level. The Republican Party of Cuyahoga County manned a booth at the festival village all week.

The fact that Cleveland was selected over Boston and Washington DC to host the event meant a lot to the people of Cleveland. For an overlooked city that hasn’t won much in sports over the last half-century, hosting these Games was a source of pride. That the games were “gay” gave it that much more meaning.

“I’m just so proud of this city,” a straight resident told me on the street. “We get a bad rap here in Cleveland and it’s been great to see the city really embrace the gay community.”

Yes, it was a smaller Gay Games. Yes, a big part of the reason was a lack of interest in Cleveland itself. And yes, few participants were there with the intent to shift the culture of Northeast Ohio.

Yet the lasting legacy of the 2014 Gay Games will be its role in changing how the blue-collar Lake Erie region views and treats LGBT people. Sure, Boston and Washington DC would have drawn bigger crowds. But their cultural impact would have been diminished in a state or a district with same-sex marriage and strong protections for LGBT people.

For Cleveland – for Ohio – these Gay Games were a watershed moment.

Cyd Zeigler is co-founder of Outsports.com. He has also written for CNN, MSNBC, Time and Playboy. He regularly appears on national sports media as an expert on LGBT issues in sports. Outsports is a media partner with the Gay Games.