Gabriel Fernandez, an eight-year-old from Antelope Valley, Los Angeles, was allegedly murdered by his mother and her boyfriend for “acting gay” 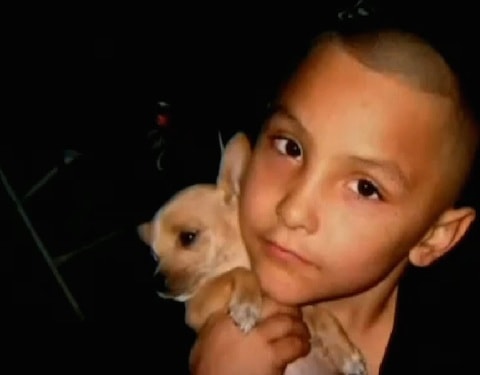 Gabriel Fernandez, an eight-year-old from Antelope Valley, Los Angeles, was allegedly murdered by his mother and her boyfriend for ‘acting gay,’ reports the LA Times.

Gabriel, who died in May 2013, was allegedly beaten, doused with pepper spray, forced to eat his own vomit and locked in a cabinet with a sock in his mouth to muffle his screams.

Gabriel’s mother, Pearl Fernandez, and her boyfriend, Isauro Aguirre, both of whom pleaded not guilty, are in jail awaiting trial on charges of capital murder and a special circumstance of torture.

Deputy District Attorney Jonathan Hatami said that Gabriel “was abused, beaten and tortured more severely than many prisoners of war” for eight months.

Two of the boy’s siblings confirmed that Gabriel was forced to eat cat feces, rotten spinach and vomit; that he slept in a locked cabinet and wasn't let out to go to the bathroom; and that Fernandez and Aguirre called him gay, punished him when he played with dolls and forced him to wear girls' clothes to school.

According to testimony, Pearl Fernandez once jabbed Gabriel in the mouth with a bat and knocked out several teeth.

One of Gabriel’s siblings said that on the day of the fatal beating, Fernandez began hitting her son because he didn't want to pick up his toys. She then dragged him into a bedroom, where Aguirre joined her, and the siblings heard screaming, banging and then silence.

James Kemp Ribe of the L.A. County coroner's office told the grand jury that Gabriel died as a result of blunt-force trauma and child neglect.  He added, "I have never seen this many skin injuries on one child.”

Gabriel's mother called 911 on May 22nd, 2013. She told sheriff's deputies that Gabriel had fallen and hit his head on a dresser. Paramedics found Gabriel naked in a bedroom, not breathing, with a cracked skull, three broken ribs and BB pellets embedded in his lung and groin. He died two days later.

The incident has prompted calls for reforms to the Los Angeles County foster-care system because child welfare workers failed to remove Fernandez from his home. Moves have since been taken to fire two social workers and two supervisors, while others involved in the case have received letters of warning or reprimand.

Watch a CBS report, AFTER THE JUMP…

Previous Post: « Scott Lively Takes Aim At The ‘Dangerous Heresy’ Of Gay-Affirming Christians – VIDEO
Next Post: What Goes On Inside A Depressed Person? – VIDEO »