Justin Bieber has finally shaved off his rat 'stache.

Thirteen Russian children have been united with their adoptive parents in Sweden, ten months after they were denied the opportunity due to Russia's ban on adoption rights to countries with gay marriage. 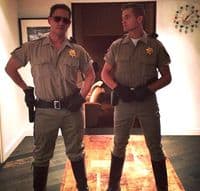 Arrow creator Greg Berlanti on his relationship with soccer star Robbie Rogers: "I’m absolutely crazy in love with him so I don’t think too much about all that stuff. I just try to live my life and I know he does too, like two people who are really happy and healthy and a relationship that we both feel really blessed about."

Mariah Carey and Nick Cannon are reportedly having marriage troubles and have been living apart for months. 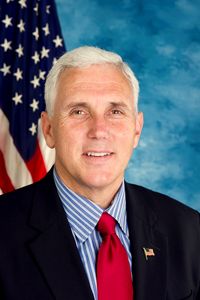 Indiana Gov. Mike Pence has been stripped of immunity from lawsuit challenging state's ban on gay marriage by federal judge who threw out the ban in court this week. Judge Richard Young ruled that Pence's actions telling the court that he had no power to enforce Indiana’s gay marriage ban but then directing executive agencies about how to proceed after court rulings on the subject were "a bold misrepresentation" and "at a minimum, troubling."

Chris Pratt dressed up as his Guardians of the Galaxy character to cheer up sick children in the hospital.

Zac Efron and Michelle Rodriguez have officially "broken up"

Dublin is leading the way on civil partnerships – with nearly 3,000 people having entered into the unions since Ireland's Civil Partnership Act went into effect spring 2011.

Introducing the Pop-Up Gay Bar. "During the first wave of dot-coms in the early 2000s, it was known as Guerrilla Queer Bar, but the basic premise remains consistent. Via a group e-mail list, members can organize or join an outing where they take over a venue with a group of fellow members, all for the joy of getting away from their usual watering holes with some newly made friends. Guerrilla Queer Bar arose not only from a desire for new frontiers but also a sense of displacement that was occurring during a time of rent hikes and shutterings of long-established businesses."

B. K. S. Iyengar, the man regarded by many as the father of modern yoga, has died at the age of 95.

Check out The Prospectives - a Brooklyn-based serialized story told through Instagram photos.

Is The Laramie Project a "convenient untruth"? – "Even though Matthew’s murder was not a gay hate crime, it’s not as if there were no others so society was off the hook and compunction was uncalled for. As a dramatic synecdoche for necessary truth, therefore, The Laramie Project is not an erroneous fiction. Shaping moral meaning from myth, legend, and metaphor is what theater has done for ages. The Laramie Project belongs to that noble canon." 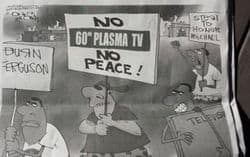 Missouri's Columbia Daily Tribune is under fire for publishing cartoon about Ferguson demonstrators that many are calling racist.

Does the MPAA have a problem with gay-related films?

A South Carolina teen was arrested and suspended from school for writing about shooting a pet dinosaur.

Does a big wedding mean a happier marriage? "[The report] found that among couples with 150 or more guests at their wedding, 47 percent reported having a high quality marriage in the years that followed. But only 31 percent of couples with weddings attended by 50 or fewer people said they were happily married later on. Couples that held medium-sized weddings — 51 to 149 guests — were not much more fulfilled: only 37 percent reported having a marriage they felt would endure."

The FBI is warning that Lyle Marvin "Ty" Hoffman, the man wanted in connection to the death of gay Minnesota activist Kelly Phillips, may be using Grindr and Scruff to find shelter.