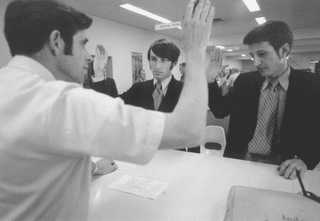 A growing number of lower-court judges tasked with reviewing the Constitutionality of states’ bans on same sex marriage are reconsidering a pivotal order issued in Baker v. Nelson, a 1972 Supreme Court case. Baker, a case challenging a state’s ability to legally limit marriage to opposite sex couples, was initially heard by the Minnesota Supreme Court before being rejected and appealed to the United States Supreme Court. The Warren E. Burger-led Supreme Court dismissed the appeal, citing a “want of a substantial federal question,” effectively giving legal merit to Baker’s ruling.

Baker has been used widely by opponents of same sex marriage as a legal precedent reflecting the then-Court’s views on gay marriage. Speaking to the lawyers defending California’s gay marriage ban, Ruth Bader Ginsberg expressed her doubts about Baker, citing the ways in which society and the court have changed,

“The Supreme Court hadn’t even decided that gender-based classifications get any kind of heightened scrutiny," she said at the time. “And the same-sex intimate conduct was considered criminal in many states in 1971, so I don’t think we can extract much in Baker v. Nelson.”

When taken in account, Baker automatically guides courts to decisions affirming bans because the Supreme Court’s refusal to hear Baker’s appeal acts as an affirmation of the original Minnesotan Supreme Court’s ruling. More and more, however, the Supreme Court’s move to strike down the Defense of Marriage Act is being read as a broad consensus that Baker is a chunk of legal history that needs to be dealt with.

“These cases demonstrate that, since Baker, the Court has meaningfully altered the way it views both sex and sexual orientation through the equal protection lens,” Circuit Judge Henry Ford wrote to the Washington Post. “The Supreme Court’s willingness to decide Windsor without mentioning Baker speaks volumes regarding whether Baker remains good law.”