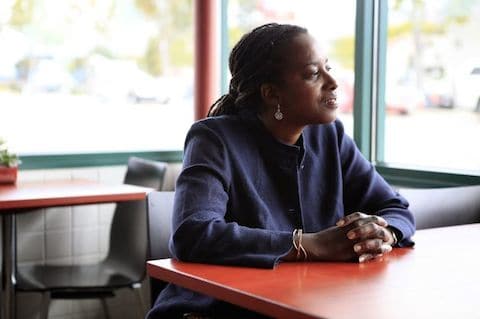 Vice Mayor of Richmond, CA Jovanka Beckles is the city's first openly lesbian councilwoman and was elected to her position four years ago in 2010. Since then, she's has been the target of a constant barrage of hate speech, both from members of the public and from her fellow council members. Mark Wassberg took to the podium to call her filth and dirt, and that it's ok for him to say that because of the First Amendment. Last month, Ken Davis hurled so much hate that Beckles snapped, telling him to "get the fuck out of my face," an outburst that her fellow councilmembers felt was entirely appropriate.

She even receives grief from some fellow councilmembers, though, such as Corky Boozé, who engages in shameless victim-blaming and saying that Beckles invites the attacks on herself for having a short fuse and having a disagreeable lifestyle.

She's got a short fuse. Some people don't care for her lifestyle. I don't care for it myself, but she takes that in a homophobic way. I'm not homophobic – my ex-wife is a lesbian. She says she's a black Latina. Well, you're either African American or you're not. If she's really black, then why does she throw black people out of City Council chambers for speaking their mind? She just says she's black around election time.

The absence of logic is mind-numbing. Fortunately, Beckles takes it all in stride and is actually energized enough to run for re-election. Contact Beckles here to show her support, and contact Boozé here to let him (politely) know that hate speech is hate speech, no matter how many lesbian ex-wives one has.