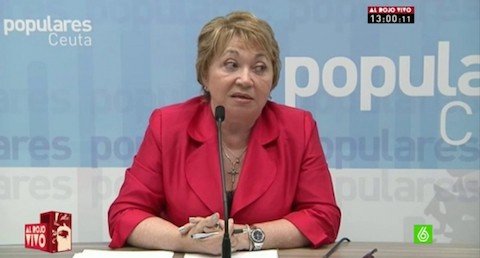 Luz Elena Sanin proves that the U.S. has no monopoly on hyperbolic wingnuttery in politics. During a discussion of Spain's national debt, the senator from Ceuta blamed the previous prime minister Jose Luis Rodriguez Zapatero for racking up over €1 trillion with "favors" to the gay community.

Sanin didn't elaborate on what, precisely, those favors were, just that the government had been subsidizing homosexuals. Normally this is where the party would circle the wagons and double-down to defend the outrageous statements made by one of their own, but unlike the GOP Sanin's conservative Popular Party wasted no time in distancing themselves from her toxic remarks. MP Francisco Marquez, a Popular Party congressional representative from Ceuta, said Sanin's words in no way reflect the positions of the Popular Party.

Previous Post: « Ecuador to Officially Recognize Same-Sex Unions
Next Post: Sam Smith Delivers One of the Best VMA Performances of the Night With Soulful ‘Stay With Me’ – WATCH »