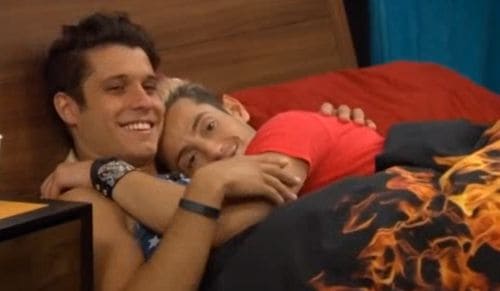 "Zrankie," the Frankie-Zach "Big Brother" showmance to end all showmances has, well, ended. For the time being at least, Frankie has moved on to another cuddle-buddy, the presumably hetero Cody Calafiore. Though Frankie, Zach, and Cody have previously laid in bed together, "Zrankie" only recently professed their love, leading one to wonder if Cody could have been a little bit jealous.

Of course it is impossible to tell just how real anyone's emotions are at the present; a cuddle could mean very little. Still, it is exciting to see the bonds develop, and for Frankie's relationship with his heterosexual housemates to extend beyond vague intimations of gay panic or, as in other seasons, outright homophobia.

Check out the cozy and cuddly footage, AFTER THE JUMP…

Previous Post: « Gay ‘Faking It’ Star Michael Willett Talks (And Sings) About His Acting And Music Career: VIDEO
Next Post: Swedish Electro Artist iamamiwhoami Has A Message In A Bottle For You: VIDEO »