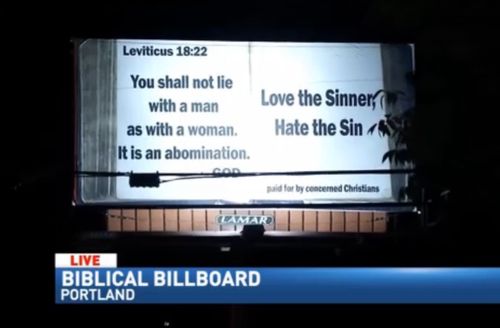 A billboard in Portland, Tennessee has been drawing mixed reactions from locals for a few months now. The advertisement depicts an open Bible with a passage from Leviticus 18:22 on one page that reads, "You shall not lie with man as with a woman it is an abomination," and the oft-heard phrase, "Love the sinner, hate the sin" on the other page. The quote is attributed simply to "God."

Some Portlanders see the billboard as a bullying tactic while others agree with the message and deem it a product of free speech. The backers of the board are unknown, but the bottom corner reads: "paid for by concerned Christians."

"I was infuriated. It's pretty cruel to single out one group of sinners," said [Ashley]Alderson…

Glenn Pennington says he sees the billboard as a freedom of speech issue.

"That's how they feel if the opposite side wants to put something up it's their business," said Pennington.

One local, Elna Harman, said she believed that the billboard was a positive promotion of God's word.

"It's a love for people," said Harman.

A mixed bag of responses to be sure, but not one person explicitly supportive of the LGBT community. Interesting that Alderson, though not in favor of the billboard, still deems the idea in question a sin.

A spokesperson from the Tennessee Equality Project responded to the billboard with particular concern for LGBT teenagers who could be negatively impacted by its message.

Previous Post: « Nick Jonas On His Gay Fans: ‘I Love Them’ – VIDEO
Next Post: One Direction’s Niall Horan ‘Cracks Up’ Over Gay Rumors After ‘Kissing’ Vine Surfaces: VIDEO »