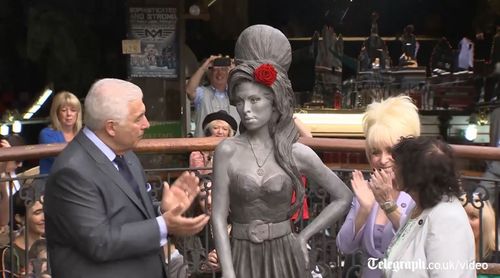 Fans from across the world travelled to Camden, north London, yesterday to celebrate the unveiling of a bronze statue of the late Amy Winehouse. Collaboratively designed by sculptor Scott Eaton and Winehouse’s father Mitch, the statue depicts Amy with her trademark beehive bouffant and a star of David.

"The hand on the hip, the turn of the head, the grabbing of the skirt, the turned in foot – these are all small elements that contribute to the personality of the piece,” Eaton told The Guardian.

"They don't put statues up for people who are with us anymore so it reinforces the fact that physically she's gone but spiritually she'll never leave us,” said Mitch Winehouse after adorning the statue with a living red rose. “We shouldn't be here but we are, this is the reality and we've just got to make the most of it. Getting people to come here, spend some time with Amy and put a flower in her hair and remember her in a very positive way. That for me is wonderful.”