In a new and rare interview, Supreme Court Justice Ruth Bader Ginsburg spoke with Elle Magazine, sharing her thoughts on a variety of topics. 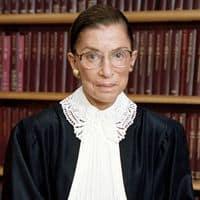 Much of the interview dealt with women's rights, specifically abortion. In the aftermath of Hobby Lobby, Ginsburg speculates that things have gotten "about as conservative as [they] will get." She notes that women having to cross state lines is not a new phenomenon, and that this policy is detrimental to the lower class. The Justice says people will eventually realize the folly of the policy — that "it makes no sense as a national policy to promote birth only among poor people."

This wasn't even the sharpest of Ginsburg's quips on the topic. In response to whether the country will become more progressive on women's rights, the aspiring diva pulled out some less-than subtle shade of her own:

I think it will, when we have a more functioning Congress..

But Ginsburg's best answer of the interview all came when she was asked whether she plans to step down to assure that President Obama will be able to appoint a liberal judge. Ginsburg balked:

Who do you think President Obama could appoint at this very day, given the boundaries that we have? If I resign any time this year, he could not successfully appoint anyone I would like to see in the court. [The Senate Democrats] took off the filibuster for lower federal court appointments, but it remains for this court. So anybody who thinks that if I step down, Obama could appoint someone like me, they’re misguided. As long as I can do the job full steam…. I think I’ll recognize when the time comes that I can’t any longer. But now I can.

That clears things up nicely. Read the full interview excerpt HERE, where the Justice waxes eloquent on family, Antonin Scalia, and what she hates about the term "activist judge."