Rapper Snoop Dogg was caught in a homophobic snare early this morning after tweeting a gay slur about an Instagram user. The tweet used the language of "f.A.G." and told the Instagram user, whose picture Snoop Dogg had reposted on his own Instagram account (see below), "bitch boy go suck ya man n get off my line." Buzzfeed reports that the post, comment, and tweet were deleted soon after they were posted, around 1am. 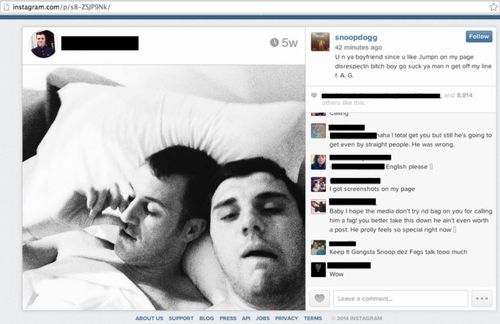 Comments from Snoop Dogg's Instagram followers were telling as well. One user threatened "I got screenshots on my page" while another threw in support, writing "Keep It Gangsta Snoop dez Fags talk tooo much." At the time the screenshot above was taken, nearly 9000 Instagram users had liked the post.

Snoop Dogg previously theorized that it may never be acceptable to be gay in the rap industry, but claimed, "I got some gay homies." What would they think about this incident, Snoop?

No comment has been made by Snoop Dogg or his representation.