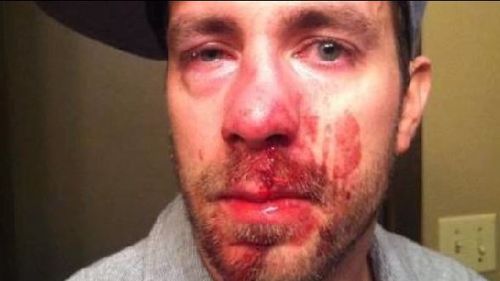 A 27-year-old man from Sioux Falls, South Dakota  is nursing a head injury after being retaliated against for calling out a woman on her use of an anti-gay slur. Drew Bartscher was waiting with his two friends outside a downtown bar Saturday night when he heard a girl calling Bartscher and his friends "faggots," KELO-TV reports:

"I hear a woman regard — make a comment to her boyfriend.  Uh, along the lines of, 'These F-ing F-words.'  Referring to homosexuals," Bartscher said.

Bartscher, who was in crowd with two of his friends outside of Wiley's Tavern, could have said nothing and walked away.  Instead, he said he politely told her she should not say that word

What happened next blindsided him.

"Then I hear this guy yell at me, 'What the F did you say to my girlfriend?!?!'  I turned just a little bit and then the next thing I know, my friends are picking me up off the sidewalk, (because) I had gotten punched pretty good," Bartscher said.

Batscher, who is straight, said that while he's a bit embarrassed about his shiner, he's not ashamed for standing up for what he believes in. He credits his parents with giving him the values to find the courage to stand up for the gay community and hopes to pass these traits on to his two girls.

What a great dad and ally.

Watch a KELO-TV report on the story, AFTER THE JUMP…