A former University of New Mexico student who claims she was shunned by school officials for making anti-gay remarks in a class paper can proceed with her First Amendment lawsuit against the school, a federal judge ruled late last month. 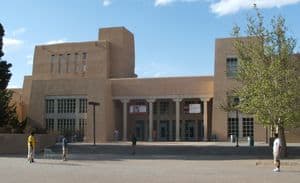 Monica Pompeo filed the suit last year, claiming UNM acted improperly when she was kicked out of [professor Caroline Hinkley's] class for describing lesbianism as perverse in a critique of a lesbian romance film. […]

After Hinkley graded the critiques, she advised Pompeo to pick up her paper from the cinematic arts office and “ponder the responses” she had written on Pompeo’s paper.

Those responses included a comment that the critique was “inflammatory and offensive.” She also blasted Pompeo’s view that a lesbian character in the film had a “perverse attraction to the same sex” and a “barren womb.”

The lawsuit alleges Hinkley violated her own syllabus, which called for “open minds” to examine “representations of a plethora of genders and sexualities.” Instead, Pompeo says, Hinkley accused her of resorting to “hate speech” and refused to grade her paper. The professor also made it clear that it would be in Pompeo’s best interests not to return to the class, Pompeo alleges.

Armijo's ruling questioned whether a "university can have a legitimate pedagogical interest in inviting students to engage in `incendiary' and provocative speech on a topic and then punishing a student because he or she did just that."

"Simply because Plaintiff expressed views about homosexuality that some people may deem offensive does not derive her views of First Amendment protection," the judge wrote.