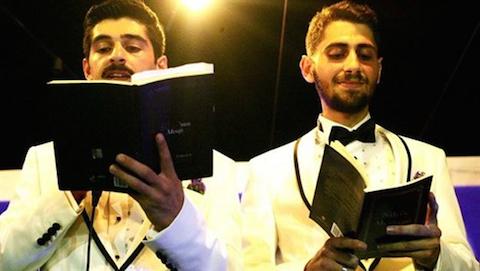 Ekin Keser and Emrullah Tüzün of Istanbul held a symbolic marriage on a ferry in late September to celebrate their love for each other, despite it having no legal significance. However, with the lack of legal recognition comes the lack of legal protections and now both Keser and Tüzün are unemployed, evicted, and facing death threats from their own family members.

The open wedding was featured in the news, and after it took place their landlord evicted the couple. Tüzün also lost his job as a waiter in Istanbul’s Kadıköy district after his boss found out about the wedding, and with Keser spending his time as an undergrad student the two now have no income. To top it all off, they have begun receiving death threats from their families, Tüzün saying,

My family and siblings threaten me with death. When our wedding was featured in the news, our family and friends began rejecting us.

We have received the biggest reaction from our families. My family knew that I was homosexual, but they reacted against my marriage.

Fortunately not all of the news is bad. According to Keser, 95% of their friends supported them and their marriage and now the couple just wants their respective families to leave them be.

Previous Post: « ‘The Wedding Capital Of The World’ Wants You To Say ‘I Do’ In Las Vegas
Next Post: U.S. Marine Probed In Murder Of Filippino Transgender Woman – VIDEO »