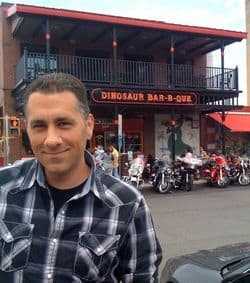 John Pavlovitz, a North Carolina pastor, recently wrote a blog post titled, "If I Have Gay Children: Four Promises From A Christian Parent/Pastor." Since hitting the web, the blog has blown up, taking over Facebook newsfeeds and receiving over 2,500 comments. The reason for its popularity? Probably because Pastor Pavlovitz approaches LGBTQ identity with a warm, open-minded message of love and support.

In the blog, Pavlovitz writes that "sometimes I wonder if I'll have gay children" and says he thinks about it often.

"Maybe it's because I have many gay people in my family and circle of friends. It's in my genes and in my tribe," he wrote. "Maybe it's because, as a pastor of students, I've seen and heard the horror stories of gay Christian kids, from both inside and outside of the closet, trying to be part of the Church."

Pavlovitz says there are four simple steps he will take if his own child(ren) are gay, steps that distance him and his family from the often negative message put across by the Christian right.

My children won’t be our family’s best kept secret…

I won’t pray for them to be made “normal”. I’ve lived long enough to know that if my children are gay, that is their normal…

I won’t pray that God will heal or change or fix them. I will pray for God to protect them…

I don’t mean some token, distant, tolerant love that stays at a safe arm’s length. It will be an extravagant, open-hearted, unapologetic, lavish, embarrassing-them-in-the-school cafeteria, kind of love…

If my kids are going to be gay, well they pretty much already are.

God has already created them and wired them, and placed the seed of who they are within them.

Not only is the message almost overwhelmingly touching, Pavlovitz is also a beautiful writer whose passion and concern for the topic at hand is evident throughout the entire blog post.

Since the blog was posted, Pavlovitz says he's spent several hours a day pastoring to people who have reached out to him saying they were touched by his blog…

"I was prepared for some people to applaud it, and for others to condemn it. That's what happens whenever you put an opinion out there," he said. "I was fully prepared for the waves of both support and hostility that accompany any vantage point, especially on a controversial topic like this."

"What I was not prepared for in any way, were the literally hundreds and hundreds of people who have reached out to me personally to thank me for bringing some healing and hope to their families; for giving them a message they rarely get from Christian leaders," he continued.

"People who haven't ever before, or in many years, are telling me the piece has moved them to engage with God and with the Church, which is the most any pastor can hope for."