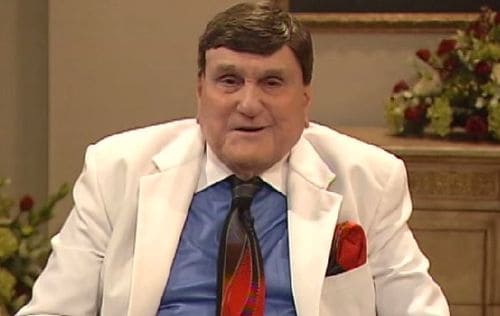 A series of reports in The Akron Beacon Journal has detailed decades of abuse and cover-ups by Ohio televangelist Ernest Angley.

Angley, pastor at Grace Cathedral Church in Cuyahoga Falls, Ohio, has been accused by former church members of performing genital "examinations," encouraging abortions and vasectomies, and arranging a marriage between a congregant and a convicted child molester.

Reporter Bob Dyer said that he had heard rumors about Angley for a long time but it wasn't until July when he received a recording of a church service in which Angley admits to examining the private parts of males that he began looking into the reports. 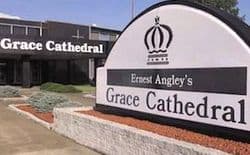 During the July 13th service, addressing accusations that he is gay and has abused both his associates and members of the congregation, Angley said “I’m not a homosexual. God wouldn’t use a homosexual like he uses me. He calls me his prophet, and indeed I am. …

On the issue of urging men in his congregation to submit to vasectomies, Angley said:

“I’ve helped so many of the boys down through the years. They had their misgivings. Sure, I’d have them uncover themselves, but I did not handle them at all. And I would tell them how that would work. And they’d have to watch it. I’d have some of them come back to me that I felt needed to. And I would tell them, I would look at them, their privates — I, so I could tell how they were swelling.”

Kenny Montgomery, a former usher at the church, who like many others interviewed by Dyer who compared Angley with cult leader Jim Jones, said “that place is a textbook cult. I’m really scared for my friends and family that still go there.”

Becky Roadman, who quit the church in 2013, said that members are not allowed to have children, an accusation backed up by another former church member Angelia Oborne:

“My husband and I can’t have children because my husband had a vasectomy. We were looking at getting it reversed, but I’m 35 years old and … may not be able to have children anymore. And that breaks my heart, because that choice was made for me, because of the brainwashing, the mind control. We weren’t allowed to have children. If you turned up pregnant, it’s almost as if you had sinned.”

Oborne added that many church members have been forced into having abortions.

Former member Greg Mulkey said that Angley doesn’t want his congregation to have children “because it would take their time and money away from [the church]. He really forced people into abortions through scare tactics, as if he were a medical doctor. It turns my stomach.”

Mulkey added that male members were often forced to have vasectomies.

Watch Bob Dyer discuss the allegations against Angley, AFTER THE JUMP…(warning: autoplay)