The University of Texas (UT) has temporarily suspended a fraternity following reports that a student had been denied a bid due to his sexual orientation, reports The Daily Texan.

The UT Austin chapter of Lambda Phi Epsilon is under investigation by its national board after civil engineering senior Diwu Zhou said he rushed for the fraternity this fall but was asked a “derogatory” question in the initial interview process. He said that the interview panel included members of the official UT chapter along with members who ran an “underground” chapter that operated while the organization was banned from campus 2005-2011. 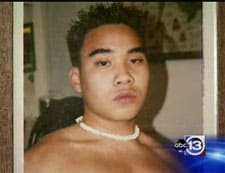 The seven year ban came about after Phanta ''Jack'' Phoummarath, a freshman pledge at the fraternity, was found dead after a fraternity house party.  His body had been defaced from head to toe with tags including “FAG,” “I’m gay” and “I AM FAT.”

The fraternity restarted at UT in fall 2013 and is on probation this year.

Zhou said that when he was told he did not receive a bid, a member of the fraternity told him the reason he was not selected was because he is gay.

“We have received a complaint about the undergraduate chapter, and our priority right now is a full investigation and finding out everything that potentially could have occurred here.”

Phil Butler, sorority and fraternity life advisor for the Office of the Dean of Students, confirmed that Lambda Phi Epsilon is currently banned from conducting any activity on campus but added that he is not aware of an “underground” fraternity organization.

David Chen, business graduate student and officer and media contact for the UT chapter, declined to comment on behalf of the fraternity.

Back in April, a student at the Central University of Florida claimed that he was rejected by the Beta Theta Phi fraternity because he is gay.

As part of their legal settlement following the death of Phoummarath, fraternity members participated in the production of an educational anti-hazing video which you can watch, AFTER THE JUMP…

"Enough is Enough" from imoJ on Vimeo.