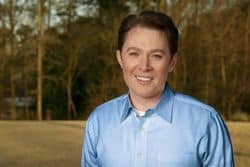 Aiken, a Democrat, trailed incumbent Renee Ellmers 57% to 43% with 69% of the vote counted.

In a district that leans Republican, Aiken was an underdog. He downplayed his celebrity and instead focused on local issues, while Ellmers tried to dismiss his candidacy given his showbiz connections. She even tried to tie him to President Obama’s economic policies, calling it the “Aiken-Obama economy.”

As Lisa Keen pointed out previously, Rep. Renee Ellmers has a zero rating from the HRC for two terms.