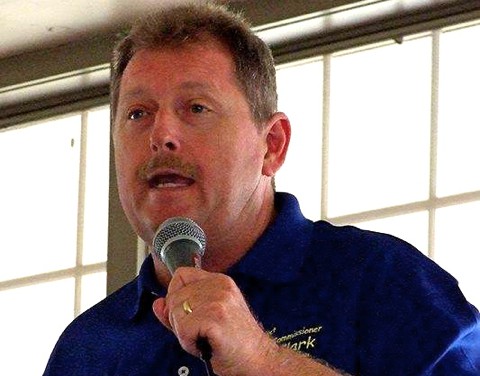 A Galveston County, Texas, commissioner says offering retirement benefits to the same-sex spouses of employees could lead to "the decline of the empire."

Republican County Commissioner Ken Clark (above) made the comments during a meeting of the Houston-Galveston Area Council (H-GAC). Clark serves on the board of the H-GAC, an intergovernmental planning agency made up of 13 member counties and more than member 100 cities in Southeast Texas.

The H-GAC recently received a notice from the IRS stating that, due to the U.S. Supreme Court's 2013 decision striking down the federal Defense of Marriage Act, H-GAC must begin offering equal 401(k) benefits to same-sex couples who are legally married in other states, or lose the tax-qualified status of its retirement fund.

The H-GAC's attorneys and a budget committee recommended complying with the IRS notice and offering retirement benefits to same-sex spouses legally married in other states. But Clark and others on the H-GAC board are apparently willing to risk losing the tax-qualified status — a decision that would affect the 401(k) plans of all 241 of its employees — to avoid offering the benefits, which they say would violate Texas' constitutional amendment banning same-sex marriage.

When the issue was discussed at an H-GAC board meeting on Oct. 21, Clark said:

“This is how the decline of the empire happens is we acquiesce to these sort of items little by little and it desensitizes us to it. At some point we’re gonna have to stand up and on this issue I choose to stand up to this because this is not, this is not appropriate for them to hold our employees hostage. And, if they choose to disqualify our plan, it will become a national issue. The American people, in my opinion, are not willing to let this come in incrementally the way this is happening, so that’s where I'm at on this issue.”

Listen to audio from the meeting here.

The scary thing is that a majority of Clark's fellow H-GAC board members went along with him, agreeing to table the item until their November meeting. The anti-gay Houston Area Pastor Council, which is also fighting same-sex benefits in Houston, then distributed an email to its members, in which Clark wrote:

"If we, as freemen, do not draw the line here against the political correctness, moral decline, and government fiat in this country, our children will inherit the bonds of moral slavery. What will you say when they ask; What did you do? Why did you not stand? If you wish to stand and voice your opinion on this matter, you may attend the next meeting and do just that."

Several members of the public spoke against same-sex retirement benefits at H-GAC's Nov. 18 montly meeting, where the board announced it was again tabling the issue. Which prompted both the Houston Area Pastor Council and the anti-gay group Texas Values to declare a victory:

“Thankfully some leaders in the Houston-area are starting to recognize that they must follow Texas law on marriage,” said Jonathan Saenz, attorney and president of Texas Values. “That’s encouraging, but Houston Mayor Annise Parker still thinks she’s above the law, and her violations of federal and state law are doing more damage to the Houston people every day,” concluded Saenz.

H-GAC has until Dec.31 to comply with the new IRS policy or lose the tax-qualified status. Stay tuned.

Previous Post: « The Ladies of The Talk Debate Whether Country Music Will Ever Embrace an Openly Gay Star: VIDEO
Next Post: ‘Bitch Perfect’ Is Todrick Hall’s ‘Aca-amazing’ Gay Parody of ‘Pitch Perfect’ – VIDEO »