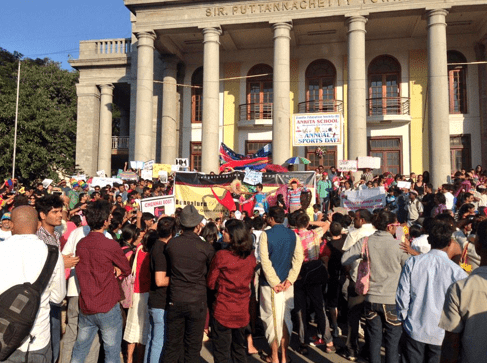 Indian police initiated a "crackdown" on public begging that resulted in the jailing of 167 hijras, which are transgender Indian women and also third gender identifiers, in a Hoysalas beggars colony located on the outskirts of Bangalore reports The Advocate and LGBT Indian news source Orinam. The crackdown began a day after Bangalore's Pride parade concluded. An anti-begging law enacted in 1975 under the Karnataka Prohibition of Beggary Act declares that detained beggars must go to a "relief center" for "rehabilitation" and stay there for a total of three years.

Fortunately, police later released all 167 hijras after they wrote guarantees saying that they will no longer ask strangers for money or food however, India's LGBT community believes the crackdown is a response directed toward the community after protests staged at Bangalore's Pride parade denounced the recriminalization of homosexuality that occurred in December 2013. Nearly 2,000 hijras and their supporters marched to the town hall on Wednesday to protest the actions of police after the crackdown sweep that occurred on Monday.

Orinam is calling for an inquiry, claiming that many of the hijras were not actively begging-many were going about their daily chores at the time they were taken into custody. Orinam also claims police barged into hijra homes, dragging them out onto the street. Critics of the anti-begging law claim that it makes looking poor a criminal act, leaving hijras susceptible to incarceration because they're often considered "untouchables," that do not have access to certain forms and levels of employment. Although all 167 of those detained were quickly released, many are fearful that hijra arrests will continue in the coming weeks.

The news come as nearly a thousand LGBT advocates and allies marched through New Delhi today, the first parade in the Indian capital since the Supreme Court recriminalized homosexuality.

Film maker and photographer Luigi Storto released a trailer almost a year ago for his film "Naleena," about hijra life and the unique procedure a hijra undergoes to "renounce" one's gender. Watch the intriguing trailer, AFTER THE JUMP…

Previous Post: « Tina Fey and Amy Poehler Are Ready to Inject Some Silliness Into Another Golden Globes: VIDEO
Next Post: 22 Celebrity Impressions While Not Stuck in Traffic: VIDEO »