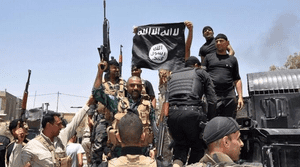 The Islamic State continues its swath of executions this week as the group accused two men of homosexuality in Syria and subsequently executed them reports Pink News. One of the men, a 20-year-old man, died in Mayadeen, which is located in the eastern province of Deir Ezzor, near the border with Iraq. ISIS claims it found videos on the man's cellphone of him committing "Indecent acts," with another male. ISIS also executed an 18-year-old man for similar reasons in Deir Ezzor this week as well. ISIS stoned both men to death for their supposed transgressions.

Social media activists say that the men were opponents of ISIS, and that the militant group accused the two men of homosexuality as a pretext to permanently silence them. The Washington Blade reports that LGBT people living under ISIS control in Iraq and the Middle East are essentially No. 1 targets for execution; with threats of being turned in by friends and family, many LGBT Iraqis are prisoners in their own homes and selves, as any indication of homosexual relations means certain death. As ISIS continues to gain supporters from around the world, the conditions of LGBT people in the region continue to worsen.