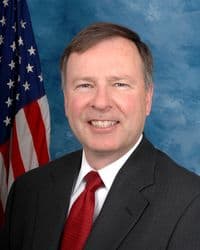 "We have the sad situation of persecuted religious minorities in the Middle East and other parts of the country, including Christians and other various sects out there, that are being really persecuted, sometimes they’re being beheaded or crucified or tortured because of their religious views. So the State Department, you would think, would want to be all over that, would want to be pressing for countries to be respecting the rights of religious minorities.

"But it seems like they are really more motivated and active promoting things like lesbian and gay rights, transgendered (sic) rights and those kind of issues to the neglect of religious prosecution (sic). And I just want them to pay attention to the severe and deadly prosecution (sic) of Christians and other religious people wherever that occurs in the world."

Lamborn ignores the fact that President Obama ordered airstrikes in Iraq this summer to deter ISIS violence against Christians, Yazidis and other muslims. Media Matters for America cited several instances where President Obama addressed ISIS violence and genocide in early August, with mentions of Christians fleeing their homes to avoid ISIS' onslaught. President Obama and National Security Advisor Susan Rice met with Christian leaders from the middle east to discuss the plight of Christians under ISIS' oppressive regime. The administration also freed several Christians imprisoned abroad including Meriam Ibrahim, who gave birth to a child in prison while shackled to the prison floor, before suffering a cruel fate at the hands of the Sudanese government after she was accused of abandoning the Muslim faith and committing adultery.

And yet the religious right's persecution complex continues, with Lamborn and Family Research Council's Tony Perkins claiming Obama continues to ignore the rights of Christians within the U.S. and believing Christianity will soon end up becoming criminalized. However, Perkins is perfectly content with anti-LGBT laws and even praised Uganda's "Kill the Gays," bill. FRC meanwhile has a habit of capitalizing and exploiting current events to further their religious agenda, including blatant disrespect for the recently deceased.