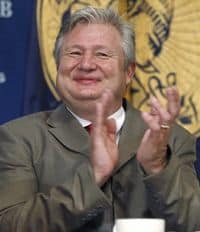 Political spouse, 'doggy sunglasses' shopper, human grapefruit. Like Barbie herself, there are a multitude of roles that Marcus Bachmann has dressed up as throughout his life. But by and large the role he takes the most heat for is his day job as a sexual orientation conversion therapist at his Counseling Care clinic in Minnesota.

"We are people of ethics," he explained.