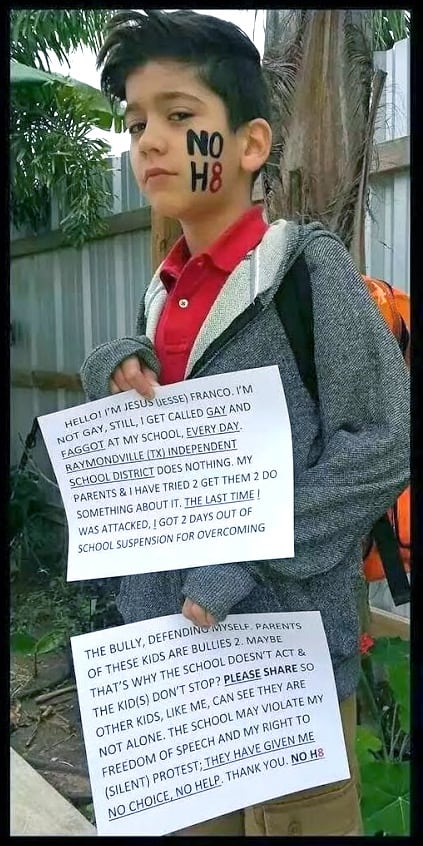 Vanessa Tijerina-Arguelles posted the above photo of her 11-year-old son, Jesus "Jesse" Franco, on Facebook on Friday morning and marked it with the hashtag #NOH8.

Since being reposted by the NOH8 Campaign a few hours later, the photo has been shared more than 83,000 times on Facebook.

As you can see, Jesse is holding two signs saying although he's not gay, he's been the victim of anti-gay bullying at his school in Raymondville, Texas, near McAllen. School officials have refused to do anything to stop the bullying, and have in fact punished him for defending himself, according to Jesse's signs.

"HELLO! I'M JESUS (JESSE) FRANCO. I'M NOT GAY. STILL, I GET CALLED GAY AND FAGGOT AT MY SCHOOL EVERY DAY. RAYMONDVILLE (TX) INDEPENDENT SCHOOL DISTRICT DOES NOTHING. MY PARENTS & I HAVE TRIED 2 GET THEM 2 DO SOMETHING ABOUT IT. THE LAST TIME I WAS ATTACKED, I GOT 2 DAYS OUT OF SCHOOL SUSPENSION FOR OVERCOMING THE BULLY, DEFENDING MYSELF. PARENTS OF THESE KIDS ARE BULLIES 2. MAYBE THAT'S WHY THE SCHOOL DOESN'T ACT & THE KIDS(S) DON'T STOP? PLEASE SHARE SO OTHER KIDS, LIKE ME, CAN SEE THEY ARE NOT ALONE. THE SCHOOL MAY VIOLATE MY FREEDOM OF SPEECH AND MY RIGHT TO (SILENT) PROTEST; THEY HAVE GIVEN ME NO CHOICE, NO HELP. THANK YOU. NO H8."

Jesse's mom, Tijerina-Arguelles, wrote the following when she originally posted the photo:

"My son is 11 years old. His school district is in a community that is a pro-bully, anti-victim community in EVERY aspect. Where victims should be of a concern (law enforcement, government, school district), and be protected. The latest insult was a gay slur, a shouted gay-bashing during lunch in the cafeteria, followed by ooohs. With faculty present. My son has a learning disability, he was caught off guard and unable to react. The bully who did this is a notorious bully, his mom is a nortorius bully. Both the mother and her son have cyber-bullied and gay bashed my boy. Enough is enough."

Tijerina-Arguelles told Towleroad on Saturday that she took the photo and posted it as a last resort before Jesse, who's in sixth grade, left for school on Friday morning.

"It was not because he did not want to go; it was because he was afraid if he fought back that he would be punished again, and they wouldn't care that he was defending himself," Tijerina-Arguelles said. "He has a learning disability. He is actually extremely bright. He just has trouble socially and with new concepts and surprising circumstances, such as being bully-ambushed."

Tijerina-Arguelles said Jesse had asked why his bullies were using gay slurs. She explained it was because he's different and they make assumptions. That's when Jesse said there should be a campaign to protect people against anti-gay bullying.

"I said, 'Oh honey, there are many, some have been around forever. The newest one is NOH8. Have you heard of it?' … I logged online and showed him the campaign. He said, 'I bet no one in Raymondville knows about that.' I said: 'I bet you're right. You want people to know about that?' He nodded. And voila! We made it happen. He got there [to school] and only one girl knew what it was about. Teachers asked him, 'Is that gang related?' He said, 'No, I support gays and their rights.' So proud of my boy. Others took out markers and followed suit."

Many of those who've commented and shared the photo say they plan to contact the Raymondville school superintendent. Here's his info should you choose to join them:

Previous Post: « Ben Carson: Live and Let Live, But Don’t Let Gays ‘Redefine’ Marriage for Everybody Else: VIDEO
Next Post: North Carolina Man Who Was Beaten, Robbed, Set on Fire By Man He Met At Gay Bar Dies »