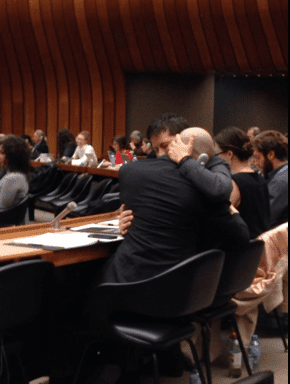 The United Nations Committee Against Torture (CAT) finds the discredited practice of conversion therapy used on LGBT youth in the U.S. cause for concern as reported in a press release today from the National Center for Lesbian Rights. Leaders from the NCLR testified before the committee and the U.S. State Department asking the U.S. government to address the use of the archaic practice.

Notable CAT members Sabtyabhoosun Gupt Domah of Mauritius, Jens Modvig of Denmark and Sapana Pradhan Malla of Nepal repeatedly questioned U.S. Department of State representatives why conversion therapy is still considered a viable treatment for LGBT youth despite receiving condemnation from every major, reputable medical organization and is a treatment that is clearly known to lead to depression and suicide in its "patients." NCLR's Samantha Ames, a campaign coordinator behind NCLR's #BornPerfect campaign who testified before the U.N. Committee yesterday on the issue, praised the committee for addressing the issue.

"Today, for the first time, a United Nations committee recognized that conversion therapy is an issue of international human rights. We are incredibly grateful to the Committee Against Torture for raising up the voices of conversion therapy survivors, and ensuring their suffering is finally being vindicated. Today was a historic day for LGBT people in the United States and around the world. There is no going back."

NCLR’s #BornPerfect campaign is a national effort aimed at ending conversion therapy within the next five years by introducing and passing laws across the country to protect LGBT youth, fighting in courtrooms to ensure their safety and raising awareness about the serious harms caused by these unsanctioned and dangerous practices. California introduced a bill banning conversion therapy in 2012 that was later challenged this year by therapy practitioners. However, the U.S. Supreme Court later upheld California's bill banning the controversial therapy.

Previous Post: « Michael Sam Sr.: ‘I Love My Son, And I Don’t Care What He Do’
Next Post: Kansas Governor Sam Brownback Vows to Continue Defending State’s Gay Marriage Ban Despite SCOTUS Ruling »