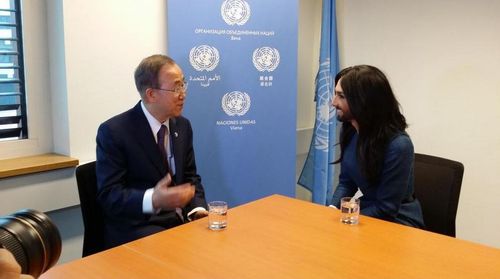 Despite the UN's somewhat uneven track record on gay issues, this news is the latest in a consistant trend of good news for LGBT people out of the U.N.

This year I extended benefits to same-sex partners of U.N. staff members… Discrimination has no place in the United Nations…When I heard that [Wurst] won this Eurovision song contest I immediately knew that she was a star of the world.

Reuters points out Ban's endorsement is particularly meaningful at a time when global tensions over LGBT issues are rising. They quote a confidant of Russian President Vladimir Putin, who criticized Wurst, saying she symbolised "ethno-fascism," and a "decadent agenda" that the West tries to impose.