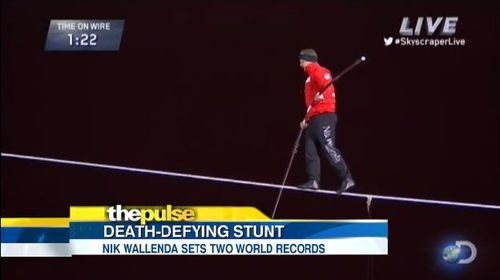 Wallenda crossed a distance of 454 feet from one skyscraper to another, all at a 19-degree incline, an angle four degrees steeper than the 15-degree practice tightrope. The tightrope began at 588 feet from the ground and ended at 671 feet.

"That cable looked like it was going straight up," he said.

The second leg of his performance featured a 94-foot walk between two towers, blindfolded and 543 feet from the ground.

Insane, adventurous or maybe a bit of both? You be the judge.

Back in 2012, Wallenda became the first person to ever cross Niagara Falls on a high wire.

Previous Post: « Conchita Wurst Performs at UN for Secretary-General, Dignitaries: VIDEO
Next Post: The Art of Lying (and The Clues You Can Use to Spot It) – VIDEO »