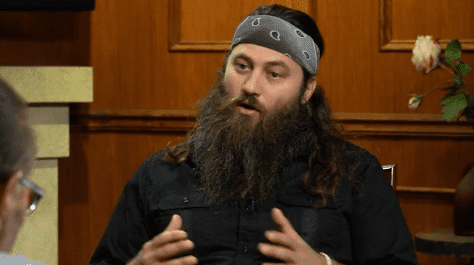 Duck Dynasty star Willie Robertson is studying the Bible in a quest to figure out if being gay is a choice.

Willie’s dad Phil got into some serious hot water a year ago when he attacked gay “sinners” who are going to hell. In an interview with GQ, Robertson senior also oddly said “we never, ever judge someone on who’s going to heaven, hell.” Phil later defended his views but claimed that although he's a homophobe, gay people "need to know that I love them".

Speaking with Larry King, junior Robertson said that he doesn’t agree with everything his old man said in the interview because “we love everybody.” Her also helpfully pointed out that there are many, many gay people in the entertainment world.

Asked if he believes that being gay is a choice, young Willie said:

“Larry, I’m trying to figure that out right now. I really am since the controversy and since I know all these people — and if the thought is ‘I’m born this way.’

“I don’t know. I’m trying to figure out myself through the passages, because I always have to look to the scriptures to see what’s there and then I put it up against people — put my time in, so I’ve spent time with people.

“I’m not the judge. God’s going to be the judge, so it’s not my job to convince people to change their lives — it’s really through Jesus. If I just introduce them to Jesus, he’ll do that.”

Willie didn’t elaborate on when he made the decision to be heterosexual.