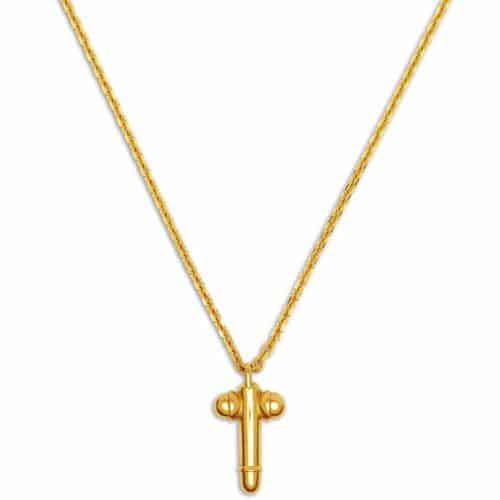 Tom Ford is selling one for your neck for $800, Harpers Bazaar reports:

"It comes in three sizes, small, medium and large—so at the risk of offending anyone, we'd argue this is no time to get frugal. Large it is, for anyone on your Christmas gift list from the Samantha of your group, as a fertility talisman to the lady in your life looking to procreate, to your tongue-in-cheek Tom Ford-loving gay bestie or to that man who is proud as a peach with what he's working with."

Lance Bass and Michael Turchin had a themed bachelor party at The Abbey in L.A.: " In addition to lap dances from hunky male dancers, Bass and Turchin celebrated with lots of penis-shaped party favors, including X-rated cups, straws and dirty necklaces.

"The model itself was made of plaster, with a little public merkin specially made to match Mark Wahlberg's hair color. (The team also created a special bulge for his pants, "a woman's stocking knee filled with birdseed.") After the team tested some prototypes, the final penis ended up being a little smaller than Diggler's oft-mentioned 13 inches: "We sculpted a version that was 12 inches long, and we tested it, and it was just way too big," special-makeup-effects coordinator Howard Berger told Grantland."