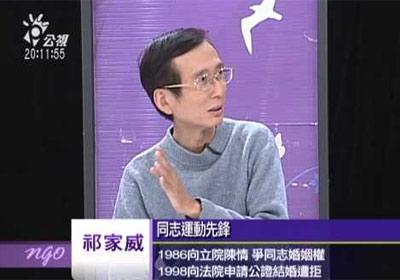 If one were to compile a list of the great LGBT activists around the world, it would have to include Chi Chia-wei (above).

Almost 30 years after he was arrested for petitioning the Taiwanese legislature to legalize same-sex marriage, Chi filed an application Wednesday seeking constitutional review of the country's marriage ban.

Chi's application comes two days after the legislature debated a proposal that would make Taiwan the first country in East Asia to legalize same-sex marriage.

Backed by more than a dozen lawyers, as well as activists from the Taiwan Alliance to Promote Civil Partnership Rights (TAPCPR), Chi said that the laws that bar same-sex couples from marrying are a violation of their constitutional rights.

With the legislature controlled by the Chinese Nationalist Party (KMT), gay rights advocates say that the legislative path toward legalizing same-sex marriage remains difficult, while the judicial path might provide a viable alternative.

Chi spent five months in jail after petitioning the legislature to legalize same-sex marriage in 1986. He first applied for constitutional review of the same-sex marriage ban in 2000, but the application stalled and was never fully considered.

Chi and his partner, who held a union ceremony in Taipei in 1988, again tried to register their same-sex marriage with a local government agency last year. But after an 18-month legal battle that included several appeals, the Supreme Administrative Court ruled against them in September. Now they are seeking a review from the Justices of the Constitutional Court, who have never addressed the issue.

From The Taipei Times:

“At the time [in 2000], I stood alone in battle, but I’m glad that more than 10 lawyers are willing to come forward and aid me in my application for a constitutional review today,” Chi said, holding back tears. “I am deeply grateful, and I would like to express my respect.”

In a spontaneous gesture to express his gratitude, Chi kneeled on the ground before the volunteer lawyers, before being swiftly pulled up.

Chi expressed his disappointment over remarks made by the Ministry of Justice and anti-gay marriage legislators during the legislative meeting on Monday.

“Medical evidence has already proved that gays and lesbians are not abnormal people, but we still have a group of homophobic officials and legislators that treat homosexuality like a disease,” Chi said. “[Their actions] have obstructed homosexuals in the pursuit of their own happiness.”

Polls show that more than half of people in Taiwan support same-sex marriage, including more than 80 percent of those ages 20 to 29. But the push to legalize same-sex marriage faces opposition from the likes of the Taiwan Religious Groups Alliance for the Family, which held a press conference outside the legislature on Monday, according to Focus Taiwan:

Watch a report from 2013 on the push for same-sex marriage in Taiwan, AFTER THE JUMP…