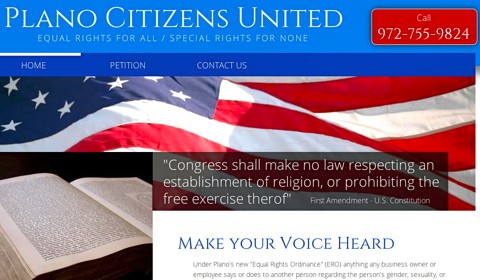 Last week we reported that a Houston-based anti-LGBT group planned a petition drive to repeal the non-discrimination ordinance passed by the Plano City Council earlier this month.

Now, opponents of the ordinance have launched a website, PlanoEqualRights.com, dedicated to gathering signatures to place the ordinance on the ballot.

A group of 80 pastors opposed to the ordinance reportedly held an emergency meeting this week at Plano's Prestonwood Baptist Church, an evangelical megachurch that's also known as "Six Flags Over Jesus." 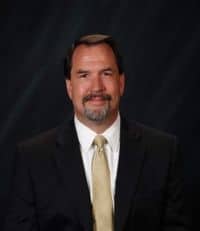 Dr. Jack Graham, Senior Pastor of Prestonwood opened the meeting with full support of the effort, calling the city’s rapid vote (same night as the first hearing) “doing business in darkness”.  He expressed appreciation for TXPC Executive Director Dave Welch taking the initiative to organize the pastor meeting as well as the stand of the Houston pastors.

Jeff Mateer of Liberty Institute gave a legal analysis of why the Plano ordinance and others like it are a direct offense against First Amendments of religious belief, expression and “free exercise”. Dave Welch then closed the meeting with the “how to” of the referendum petition process.  He explained that since Plano and Houston City Charter requirements for qualifying a referendum are nearly identical, the critical steps of signature gathering and having notarized are likewise the same so they could benefit from our experience.

Of course, the group's petition in Houston was rejected by the city due to invalid signatures, resulting in a lawsuit. According to the Texas Pastor Council, the Plano petition will need 3,822 signatures by Jan. 20 to qualify for the ballot.

The repeal website, under the banner "Plano Citizens United: Equal Rights For All/Special Rights For None," hilariously contains a typo in the First Amendment (above) and states:

Under Plano's new "Equal Rights Ordinance" (ERO) anything any business owner or employee says or does to another person regarding the person's gender, sexuality, or "identity" may be a CRIME.  Plano now CRIMINALIZES Christians', Jews', Muslims', and others' beliefs about men and women.  City bureaucrats will determine whether citizens' statements and actions are "unjust".  This policy subjects citizens to CRIMINAL SANCTIONS for our beliefs on topics affecting much of human interaction and is a direct threat to our freedoms of both speech and religion!

Meanwhile, the Plano ordinance continues to draw heavy criticism from transgender advocates, due to exemptions for nonprofit organizations as well as for restrooms and similar facilities.

The Transgender Education Network of Texas said in a press release this week:

We, the staff and board of Transgender Education Network of Texas are of mixed reaction in regard to news in Plano, Texas about the passage of a NonDiscrimination ordinance. On the one hand, taking steps towards treating all city employees in a fair and just manner based on merits rather than preconceived ideas and prejudice is an act worthy of respect. On the other hand, implementing provisions into that same ordinance allowing nonprofits to continue practicing bigotry in providing services severely undercuts any advance possibly made. …

We are left wondering, what is the real intent of Plano's NonDiscrimination ordinance? To look good on paper, but really do nothing or to just disguise better the injustice already being done?

UPDATE: Check out this hateful flier that opponents of the ordinance have been posting on residents' doors: 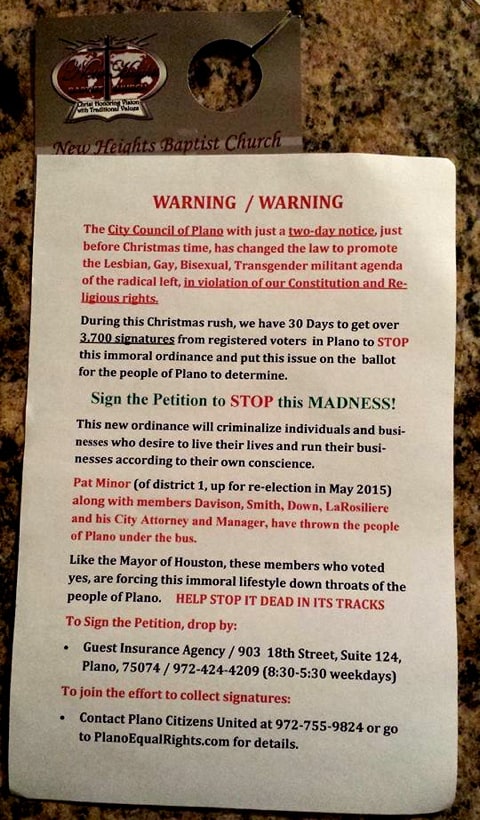