Oklahoma Governor Mary Fallin won't say if she believes businesses should be allowed to refuse service to gays, according to the AP: 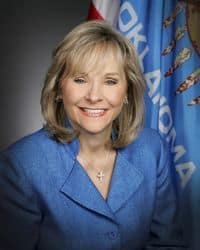 During a presentation to reporters and editors at The Associated Press’ annual legislative forum, Fallin said she has many gay friends, but declined to answer a question about whether she thought it was inappropriate for businesses to discriminate against them based on their sexual orientation.

“In general, I have lots of gay friends that I do talk to and hang out with, and I think we should respect them. They’re good Oklahomans,” Fallin said.

The comments come after a week during which Oklahoma Rep. Sally Kern, who has compared gays to terrorists, filed three offensive anti-gay bills for the legislature to consider.

The "Preservation and Sovereignty of Marriage Act" would bar the use of taxpayer dollars or government salaries for "the licensing or support of same-sex marriage. A second bill, the heinously titled “Freedom to Obtain Conversion Therapy Act” gives parents the right to seek help to "cure" their gay kids. A third bill, House Bill 1597, would allow any Oklahoma business to refuse service to an LGBT person, or group, similar to the bill that failed last year in Arizona because businesses would not have it.

Despite the fact that Fallin says she has "lots of gay friends," she has been no friend to gays in her official capacity as governor.

When a federal judge struck down Oklahoma's gay marriage ban in January of last year, Fallin said she was "troubled" and then blasted the U.S. Supreme Court when it let the 10th Circuit ruling upholding the decision stand.

So when Fallin says she thinks gay Oklahomans should be respected, it's probably a bunch of B.S..