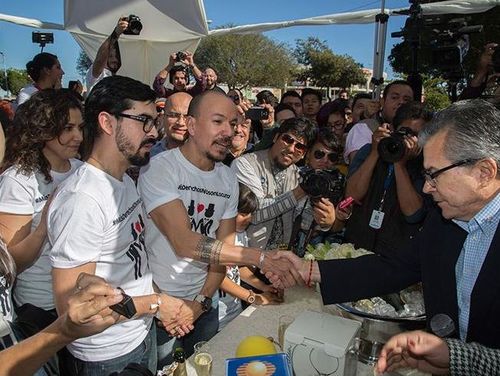 Victor Fernando Urias Amparo (above middle), 37, and Victor Manuel Aguirre Espinoza (above left), 43, took their vows amid a crush of media and supporters outside Mexicali City Hall. “Yes we could, yes we could,” the crowd cheered in Spanish.

The impromptu wedding ceremony came as a surprise to the pair, who had come to City Hall on Saturday morning to participate in a gay rights demonstration, said their attorney, Jose Luis Marquez. They had received hints that a wedding might take place, but were doubtful. They had already been rejected three times, despite an order from Mexico’s Supreme Court last June.

The two first sought a marriage license nearly two years ago, but a steady stream of roadblocks during their various attempts prevented them from tying the knot. Two months ago, Mexicali officials cited a paperwork error in refusing to perform a civil ceremony for the couple.

Last week, Aguirrre and Urias were scheduled for a ceremony at Mexicali City Hall but were barred from marrying after an anti-gay activist lodged a formal complaint that the men "suffer from madness." That led to a social media campaign #MisDerechosNoSonLocura ("my rights are not madness") that caught fire and was retweeted by a number of Mexican celebrities over the past week.

Rex Wockner was outside the city hall to capture the marriage ceremony. You can watch the historic moment for yourself AFTER THE JUMP…

In related news, the mayor of Tijuana Jorge Astiazarán Orcí has announced gay couples will also be able to marry in his city as long as they meet the requirements.