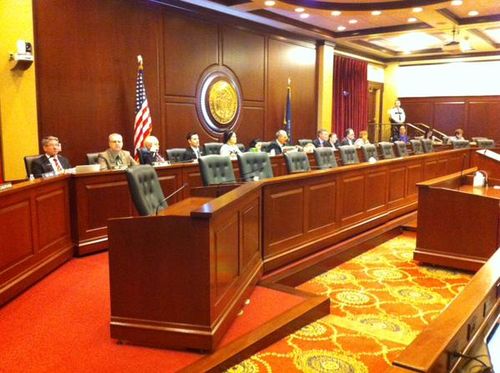 Idaho's House State Affairs Committee has voted 13-4 along party lines to defeat a bill that would have added "sexual orientation" and "gender identity" to the state's Human Rights Act.

"We have come a long way. I think this very hearing has brought us a long, long way," said Rep. Ken Andrus, R-Lava Hot Springs, addressing supporters of the bill. "Do not despair. Your concerns are legitimate, very legitimate, and people in Idaho and in the Legislature have heard you and are hearing you."

But, he added, "We have to be very careful how we make those rules and today my feeling is that this is not the rule that addresses the whole picture."

KBOI2 adds many supporters of the bill left the auditorium in tears, and lined the halls of the Statehouse with their hands over their mouths in silent protest.

The Statesman, which came out in support of the bill in an editorial this week, had a sticky note on yesterday's front page reading "Add No Words: Stand Up to Bullying!"

Mike Jung, the paper's publisher, offered the following statement in regards to the front-page ad: 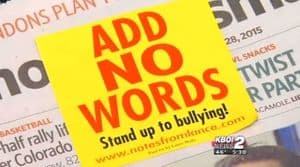 "It's unfortunate the advertising Post It note that appeared on the front page of the Statesman has created hurt and anger among some readers. That was not the intent.

"We welcome and encourage open discussion and dialogue among many topics, including the legislation to ban discrimination against gay, lesbian and transgender people, commonly referred to as Add the Words. In fact, if a company or individual wanted to communicate they were in favor of the legislation, we would have accepted their paid advertising. Our position is clear on the billas we strongly support its passing.

"Regarding the paper accepting the ad, we provide a platform for both sides of every issue. I would have accepted the same Post-It note if it had read, 'Add the Words, Stop the Bullying.' We offer the same advertising opportunities regardless of the opinion shared within the advertisement. That said, we reserve the right to refuse advertisements that include slanderous or defaming statements. Wednesday's ad was marked as 'Paid for by Lance Wells.' "

Wells, a Christian writer and musician, has called homosexuality "a perversion – a very serious sin – that its practitioners and defenders will invariably demand that others accept it, approve of it, and (to one degree or another) participate in it."

He also thinks homosexuality should be re-criminalized:

I would prefer to see the United States reenact laws condemning these unhealthy and indecent lifestyles in the most certain of terms, implementing serious consequences for those found guilty of practicing them.  For such people are, quite literally, enemies of the state.  Their behavior spreads spiritual, mental, and physical disease and disorder.  It undermines the most important bastions of society:  the Church and the family.

Previous Post: « Good Will Hunting’s Missing Gay Sex Scene Was Only for Those Who Read the Script: VIDEO
Next Post: The OXD Mirror: Andy Butler Goes Solo, And Other New Music For The Week »