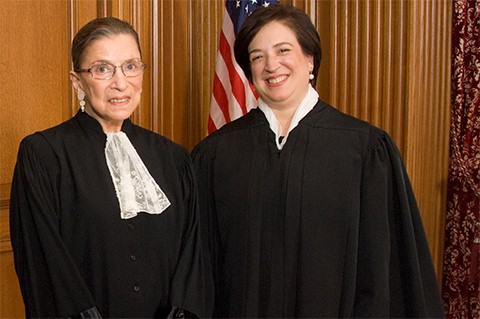 The American Family Association (AFA), known for its vehement and vitriolic opposition to gay rights, has demanded that Supreme Court Justices Elena Kagan and Ruth Bader Ginsburg (a.k.a. Notorious R.B.G.) recuse themselves from the Court's review of the 6th Circuit Court of Appeals' decision to uphold same-sex marriage bans in Kentucky, Michigan, Ohio and Tennessee because both justices have officiated at same-sex weddings:

“Both of these justices’ personal and private actions that actively endorse gay marriage clearly indicate how they would vote on same-sex marriage cases before the Supreme Court,” said AFA President Tim Wildmon. “Congress has directed that federal judicial officers must disqualify themselves from hearing cases in specified circumstances. Both Kagan and Ginsburg have not only been partial to same-sex marriage but they have also proven themselves to be activists in favor of it. In order to ensure the Court’s integrity and impartiality, both should recuse themselves from same-sex marriage cases. Congress has an obligation to Americans to see that members of the Supreme Court are held to the highest standards of integrity. The law demands it, and the people deserve it.”

AFA followed its statement with an "Action Alert" to its members, calling on them to write to their members of Congress, "urging them to remind members of the nation’s highest court of their charge to maintain impartiality."

The weddings in question were officiated by Kagan in September of 2014 and by Ginsburg in August of 2013.