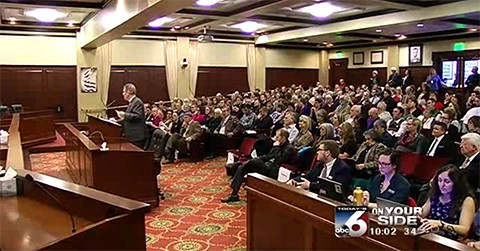 As we reported yesterday, an Idaho House Committee had finally agreed to hear testimony on a proposed non-discrimination bill that would add protections for Idahoans based on their sexual orientation and gender identity. The hearing, which began yesterday and continues today, saw at-times heated disagreement between LGBT rights activists who have long campaigned for legislators to "add the words" "sexual orientation" and "gender identity" to the state's existing Human Rights Act and backers of so-called "religious freedom" who claim that adding protections for LGBT individuals would infringe upon the rights of the religious.

"Don't make laws that protect (against) laws against nature and sexual deviant acts," said Paul Thompson of Twin Falls. "Regardless of sexual orientation, it is a law that makes a mockery of all that is created and to our creator."

State Rep. John McCrostie of Boise, currently Idaho's only openly gay state lawmaker, responded that he, too, was a Christian and asked if Thompson's beliefs were greater than his own.

"I respect an individual's desire to want to live out their lives as they feel compelled to do so," Thompson said. "But I owe myself authority to the written word of God."

Many LGBT individuals spoke up at the hearing to share their own stories of discrimination in an attempt to underscore the importance of the bill:

"I want to be valued as a human being based on the person that I am, the person that my mother raised me to be," said Julie Stratton of Post Falls. "Please include my wife and me as fully equal citizens of this state and help us to be proud of living here."

Stratton's testimony —along with many other personal stories of discrimination from lesbian, gay, bisexual and transgendered Idahoans— was countered by the many concerns coming from pastors, small business owners and national conservative organizations afraid the bill would infringe on free speech and religious freedoms.

Arizona-based United Families International President Laura Bunker cited cases in other states where businesses were sued for declining to serve to same-sex couples getting married.

"In the end these non-discrimination laws are not fair to all. Someone is ultimately discriminated against," Bunker said. "Why would Utah, or Idaho, sorry, want to put that kind of wedge between its citizens?"

You can watch a livestream of the Idaho House committee's ongoing session today, HERE.

And watch video on the testimony given yesterday, AFTER THE JUMP… (warning: autoplay) 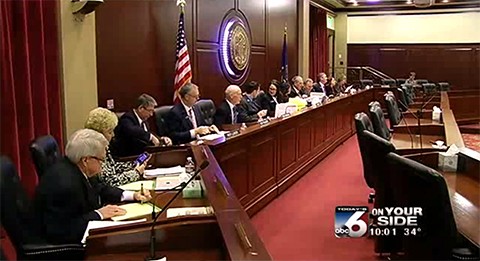