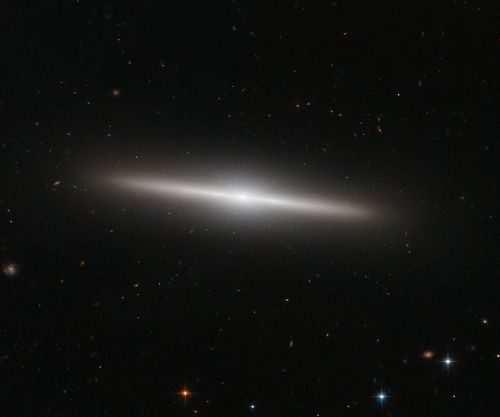 Earlier this week NASA posted on Facebook the above photo of IC 335 – a lenticular galaxy located in the Fornax Galaxy Cluster some 60 million light-years away.

As seen in this image, the disk of IC 335 appears edge-on from the vantage point of Earth. This makes it harder for astronomers to classify it, as most of the characteristics of a galaxy’s morphology — the arms of a spiral or the bar across the center — are only visible on its face. Still, the 45 000 light-year-long galaxy could be classified as an S0 type.

These lenticular galaxies are an intermediate state in galaxy morphological classification schemes between true spiral and elliptical galaxies. They have a thin stellar disk and a bulge, like spiral galaxies, but in contrast to typical spiral galaxies they have used up most of the interstellar medium. Only a few new stars can be created out of the material that is left and the star formation rate is very low. Hence, the population of stars in S0 galaxies consists mainly of aging stars, very similar to the star population in elliptical galaxies.

No word yet on if Anne Hathaway and Matthew McConaughey were spotted attempting to repopulate the human race on a nearby planet.