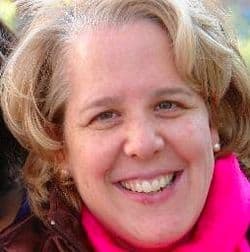 Roberta Kaplan, the Paul Weiss attorney who was Edie Windsor's attorney, is in New Orleans to argue for marriage equality at the Fifth Circuit. The cases on appeal come from Texas, Mississippi, and Louisiana, the last of which, by the way, has a case under simultaneous consideration for Supreme Court review. In Texas and Mississippi, federal judges struck down marriage discrimination laws as unconstitutional; in Louisiana, a startlingly wrongheaded and overtly antigay opinion upheld that state's ban. The Fifth Circuit is the next stop.

The Fifth Circuit Court of Appeals, which covers just the three states involved in these marriage equality cases, is a conservative court: it has more judges appointed by Republican presidents than Democrats. But, as we know, that does not always signal an anti-gay opinion. Judge Posner, who wrote a breathtaking pro-equality decision at the Seventh Circuit, was appointed by President Reagan.

President Reagan also appointed two of the judges on the Fifth Circuit panel: Patrick Higginbotham and Jerry Smith. The third judge, James Graves, is an Obama appointee. I must admit that I don't know much about his background. Judge Graves was the only African-American judge to serve on the Mississippi Supreme Court during his tenure and he spent most of career in public service in Mississippi. A short review of some of his decisions in Mississippi reveal few controversial views. His opinions are well-reasoned.

Judge Smith has been a reliable conservative — read: right wing conservative — for much of his time on the federal bench. Judge Higginbotham, however, is a bit of a wild card. In fact, he reminds me, in certain ways, of Judge Posner.

Both are well-respect in the judiciary and among court watchers and lawyers. I never argued in front of him, but several colleagues did and they spoke of him as fair and not always an automatic supporter of our corporate clients. Judge Higginbotham's name was floated as a possible alternative that Senate Democrats would be willing to confirm if President Reagan withdrew Judge Robert Bork's nomination to the Supreme Court (the seat would ultimately go to Justice Kennedy). More recently, he upheld the University of Texas's affirmative action plan. His opinions may not offer the same doctrinal coherence as Judge Posner's: Judge Posner is a brilliant economic mind whose decisions focus on efficiency, practicality, and individual freedom. But he is not beholden to one political party.

Also, they have both said similar things about the conservative tilt of the judiciary. Posner is famously frustrated with Republicans in politics and Republican judges on the bench, many of whom he says are too radical on the right. Judge Higginbotham also gave an interview suggesting that the court has moved away from him since he arrived: he was once considered a conservative; now, compared to others, he isn't.

Judge Higginbotham is the swing vote. He is a moderate and his opinions appear reasonable. I would watch his questions.