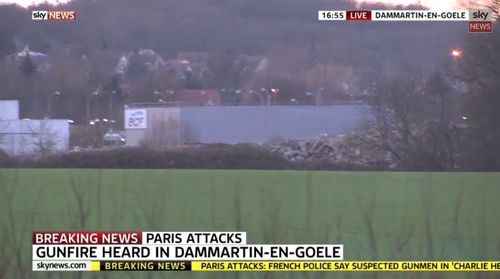 UPDATE: Cherif and Said Kouachi, the suspects in the Charlie Hebdo terrorist attack, have been killed in by security forces, Otis Mayor Bernard Corneille said.

French police on Friday killed the two brothers suspected of murdering 12 people at a Paris newspaper on Wednesday and freed his hostage unharmed, the authorities said. The police launched a simultaneous raid on a kosher supermarket in Paris where an alleged associate of the brothers was holding an unnamed number of hostages. At least some of hostages escaped unharmed, according to the police.

France is once again on high alert this morning as two standoffs with gunmen are underway in and around Paris. CNN reports that authorities have not said if and how the situations are related, but one involves the two brothers wanted in the Charlie Hebdo massacre that claimed the lives of 12 people (10 journalists and two police officers) Wednesday. 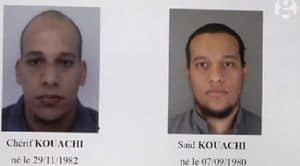 In Dammartin-en-Goele, about 25 miles northeast of Paris, thousands of antiterrorism forces encircled a commercial building, where the armed pair suspected in the newspaper massacre was holed up with at least one hostage.

But negotiators also reached out to the brothers, who are believed armed and possibly preparing for a last-stand siege.

A police source said several people were taken hostage at a kosher supermarket in eastern Paris after a shootout involving a man armed with two guns.

The source said he bore a resemblance to the gunman suspected of killing a policewoman in a separate shooting in southern Paris on Thursday and believed to be a member of the same jihadist group, Butte Chaumont, as the two Hebdo suspects.

Police released pictures of a 32-year-old man, Amedy Coulibaly, and a 26-year-old woman, Hayat Boumeddiene, wanted in connection with the southern Paris incident.

Watch Sky News' live coverage of the developing story, AFTER THE JUMP…

Previous Post: « Nigerian Author and Marketing Exec Kehinde Bademosi Comes Out As Gay
Next Post: Robbie Kaplan Argues for the Freedom to Marry at 5th Circuit Today: What To Watch For »