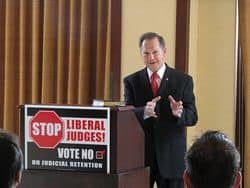 The order states, “Effective immediately, no Probate Judge of the State of Alabama nor any agent or employee of any Alabama Probate Judge shall issue or recognize a marriage license that is inconsistent with Article 1, Section 36.03, of the Alabama Constitution or § 30-1-19, Ala. Code 1975.”

The order goes on to state that if any probate judge fails to follow the state’s constitution, “it would be the responsibility of the Chief Executive Officer of the State of Alabama, Governor Robert Bentley… to ensure the execution of the law.”

As we reported earlier today, probate judges who refuse to issue marriage licenses to same-sex couples may face fines and jail time.

Susan Watson, executive director of the American Civil Liberties Union, said she doubted probate judges would defy a federal judge on Moore’s behalf. She accused the chief justice of grandstanding.

According to a Friday report by MSNBC, Liberty Counsel claims it is already representing five Alabama judges who will not be issuing licenses to gay couples tomorrow.

Roy Moore is trying to create the illusion of confusion in #Alabama, but the only confusion is coming from Roy Moore. #Followthelaw

Statement via email from @NCLRights's @Chris_Stoll, atty for two of the AL plaintiffs responding to Roy Moore "order" pic.twitter.com/dRGL5OR8bE