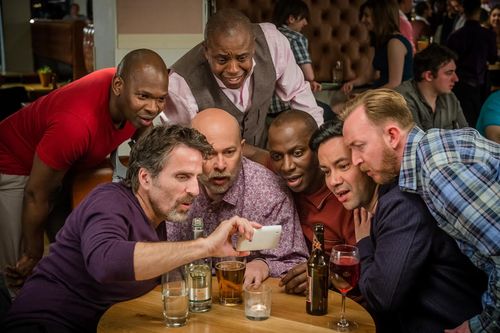 Stateside fans of Russel T Davies who've been itching to see his new interconnected UK gay dramas Cucumber and Banana are set to get a a surprise sneak peak following the season premiere of RuPaul's Drag Race this Monday on Logo.

The two interwoven drama series will explore 21st century gay life in all its powerful, witty, dark and uplifting guises through the lens of two disparate generations. The hour-long Cucumber will explore the lives and misadventures of Henry Best (Vincent Franklin) and his long-suffering boyfriend of nine years, Lance Sullivan (Cyril Nri). The half-hour Banana will follow the individual lives of younger characters orbiting around Henry’s world, telling stories of modern love – the romantic, the obsessed, the hopeful, the lonely, the lost, and the lucky – in an urban Manchester, England setting.

Watch a brand new Banana clip of the show's heartbreaking opening scene, AFTER THE JUMP…

The first episodes of Cucumber and Banana will air after RuPaul's Drag Race next Monday, March 2 at 10pm ET/PT. The two shows will then return for their official season premieres on April 13.