Discussing his views on gay rights alongside Ruth Bader Ginsburg at George Washington University Thursday, Supreme Court Justice Antonin Scalia bristled at the notion that he comes across as "anti-gay". 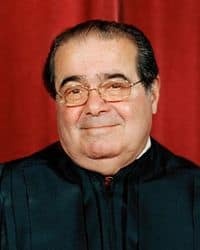 “The issue of gay rights, on abortion, on many of the issues in which Ruth’s opinions and mine differ does not pertain to the substance,” he said. “It doesn’t pertain to whether gay people ought to have those rights or whether there ought to be a constitutional right or a right to an abortion,” he said.

“That isn’t the issue. The issue is who decides,” Scalia told the gathering. “That’s all. I don’t have any public views on any of those things. The point is who decides? Should these decisions be made by the Supreme Court without any text in the Constitution or any history in the Constitution to support imposing on the whole country or is it a matter left to the people?” he asked.

“But don’t paint me as anti-gay or anti-abortion or anything else,” he added. “All I’m doing on the Supreme Court is opining about who should decide.”

Ginsburg then added, “It isn’t the Supreme Court that is deciding for the whole society like an imperial ruler. There hasn’t been any major change in which there wasn’t a groundswell among the people before the Supreme Court put its stamp of approval on the inclusion in the equality concept of people who were once left out,” she said.

In 2013, Scalia called gays an "invented minority" in reference to recent rulings on same-sex marriage.