Michigan Court Administrator awarded $730,000 for turning in judge caught 'preaching from the bench.' 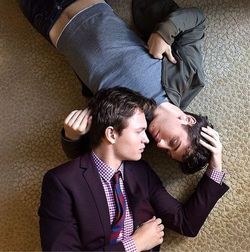 What does Ansel Elgort regret about losing his virginity at 14? The lighting: "That’d be one thing I’d do differently. It was, like, fluorescent, bright bedroom light, like, over the covers."

Jessica Williams will not be replacing Jon Stewart on The Daily Show.

Kelly Clarkson says no one wants to work with her.

Jonathan Groff is cute on the red carpet.

7 Alabama counties are still barring same-sex couples from saying "I do."

Niagra Falls has frozen over.

Speaking of Hillary, is Arkansas' anti-gay bill a test for the potential Presidential hopeful?

What's it like to kiss Kevin Spacey? Meechum knows.

Missy Elliot continues to prove why we need her to make a comeback.

Oklahoma might actually eliminate AP US History from schools, replacing it with teaching of sermons, the ten commandments, and Ronald Reagan speeches.

Goldie Hawn tells Harvard Business Review about why there was no sequel to The First Wives Club: "We were all women of a certain age, and everyone took a cut in salary to do it so the studio could make what it needed. We all took a smaller back end than usual and a much smaller front end. And we ended up doing incredibly well. The movie was hugely successful. It made a lot of money. We were on the cover of Time magazine. But two years later, when the studio came back with a sequel, they wanted to offer us exactly the same deal. We went back to ground zero. Had three men come in there, they would have upped their salaries without even thinking about it. But the fear of women’s movies is embedded in the culture.