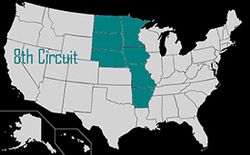 The court will hear oral arguments in the case on May 12 alongside three other same-sex marriage cases from South Dakota, Arkansas, and Missouri.