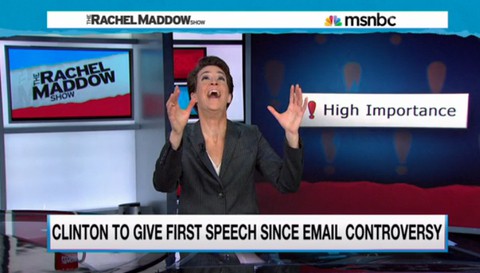 Yesterday, we reported on the controversy that has erupted over the revelation that former Secretary of State Hillary Clinton exclusively used her personal email address during her tenure at the State Department. The news raised questions about whether such an action was a violation of any rules or laws but was also seized upon by Republican presidential hopeful Jeb Bush who demanded that Clinton follow his lead and release her emails because "transparency maters."

Transparency matters. Unclassified @HillaryClinton emails should be released. You can see mine, here. http://t.co/wZbtwd8O2j

On her show last night, Rachel Maddow was quick to skewer Bush and other Clinton critics, pointing out that Clinton is far from the only government official, elected or otherwise, who has used their personal email account for official business while in office. "Everybody does it!" said Maddow. Even Jeb Bush.

But what made Bush's call for "transparency" even more hypocritical, is the fact that while Bush claims he has been transparent and released his emails from his time in office, he cherry-picked only 250,000 of the nearly 3,000,000 emails he received while Governor of Florida. How transparent is that?

Still, Maddow stressed that while singling Clinton out for using her personal email is stupid, "what isn't stupid is what the rules and the law were when Clinton was Secretary of State."

Watch Rachel dig into the issue, AFTER THE JUMP…

Previous Post: « Kelly Clarkson Kills It On GMA With ‘Since U Been Gone’ – VIDEO
Next Post: Researchers Identify Origins of Elusive HIV Strains, Shed Light on The Virus’ Evolution »