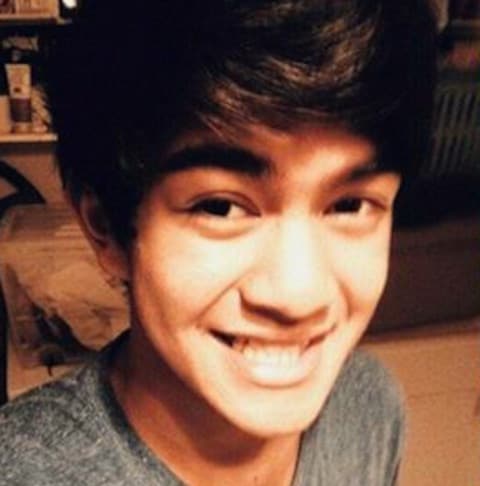 A Canadian gay teenager has received an outpouring of support online after he posted screenshots in which his father allegedly described the news of his son’s coming out as “worse than death,” reports The Independent.

The screenshots of messages, which 15-year-old Tyler says his father sent via Facebook, say the teen had brought “shame and embarrassment” on his family and should “stay away.” 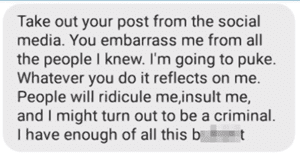 "You embarrass me from all the people I knew. I'm going to puke. Whatever you do it reflects on me. People will ridicule me, insult me, and I might turn out to be a criminal. I have enough of all this b******t.

"You are trying to ruin me. This is worse than death.

"We took care of you since you were a baby. We loved you, took care of you when you’re sick. Lost many days and nights in all your fifteen years. Now this is what we get in return, shame and embarrassment.

"'If only you didn't reject God and His teachings in your life you could have been strong enough to stay from evil and scum that surrounds you.

"My dad’s reaction to me coming out. Can’t even say it to my face.

"This is terrible please find someone in your life who cares, they’re there I promise.

"This physically hurts to read wow."

However, Tyler has received support from people on social media who have shared and commented on his story.

@tylerblvr Just read your story & had to tweet you. You are a brave and beautiful soul who doesn't deserve such harsh words. Stay Strong <3

@tylerblvr It's a shame your father reacted the way he did.. He will miss out on the wonderful person you will become! #NoRoomForHate #NOH8 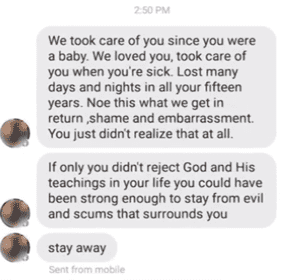 Although Tyler’s mother and sisters have been supportive, he has not spoken to his father since the homophobic tirade.

"I haven't heard from my father at all. I moved out to my aunts' house a few weeks after he sent the messages.

"He sent them a week after I came out during December, and I haven't spoken to him since then. The rest of my family were kind of blown away by how much attention [the screenshots] have drawn.

"I initially just posted them in anger and disappointment to my Tumblr blog because that is usually where I vent and rant about stuff. I never thought that it was going to [escalate] like this."

Previous Post: « Community Rallies Behind Ohio Lesbian Couple After Facing Discrimination From Videographer
Next Post: Franklin Graham Urges Bigot Conference To ‘Not Shut Up’ In War On Gay Rights: VIDEO »