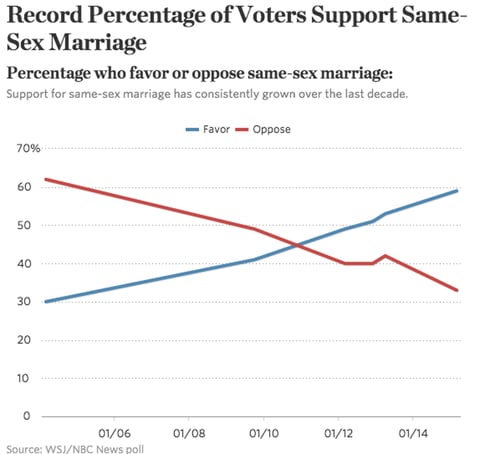 A new poll from The Wall Street Journal and NBC News shows that nationwide approval for same-sex marriage in the U.S. has hit an all-time high. The meteoric rise in support for marriage equality is unparalleled even when compared to other social issues that witnessed dramatic changes in popular opinion.

Fred Yang, the Democratic pollster who conducted the survey with Republican Bill McInturff said public opinion about gay marriage is changing at a much more rapid rate than did the nation’s attitudes toward interracial marriage, which now is supported by 87% of Americans.

Support has grown markedly for gay marriage among Hispanics, women and people who lack college degrees, among other demographic groups. Opposition among conservatives has lessened: Some 35% of conservatives supported gay marriage in March, up from 26% in April, 2013.

Among Republicans, 40% support gay marriage, up from to 27% two years ago.