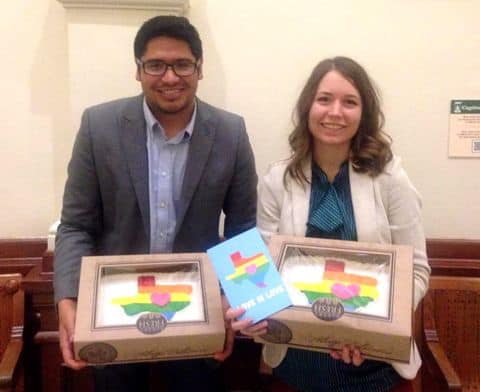 Last month, anti-gay bigots in the Texas Legislature celebrated the 10th anniversary of the state's marriage amendment by slicing a symbolic wedding cake during "Texas Faith and Family Day" at the Capitol. 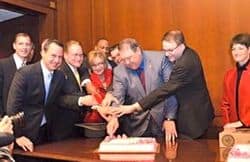 [Lt. Gov. Dan] Patrick’s speech was followed by the cutting of two symbolic wedding cakes to celebrate the 10-year anniversary of a Texas constitutional amendment that limited marriage to opposite-sex couples.

State Rep. Cecil Bell, R-Magnolia, was called forward to slice into one of the cakes in recognition of his House Bill 623, which would withhold the pay of county clerks and government employees who issue a marriage license to a same-sex couple.

“My family’s been in Texas since 1852,” Bell said after the forum. “What has always been normal for us, we’re suddenly being told it’s not normal, that those things that are our traditional values, somehow they are wrong.”

On Wednesday, the Texas Democratic Party responded by delivering gay wedding cakes — accompanied by cards saying "LOVE IS LOVE" — to the offices of several of the legislators who participated in the cake-cutting stunt. From a fundraising page for the event, "Send a slice of love": 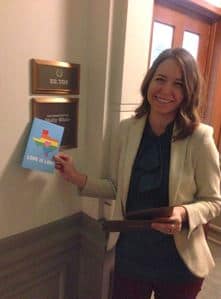 We want to send these officials a clear message that Texans stand up for the freedom and the right to marry who you love. So we’re going to send several of the people in this picture a slice of love – cakes that show that, in Texas, love is love.

No matter how low Texas Republicans get when showcasing their disrespect for basic civil rights like the freedom to marry, we will never stop pushing back.

These cakes are a fun way to show your support for marriage equality in Texas and send a powerful message to Texas Republicans that Texans deserve the freedom to marry who they love.

No word on whether the Texas Department of Public Safety will now issue a warning about gay wedding cakes.

In any case, the next symbolic showdown in the battle over same-sex marriage in Texas comes March 23, when Alabama Chief Justice Roy Moore visits the Capitol on the same day as Equality Texas' Family Advocacy Day.