Don Feder, the president of “pro-family” listed hate group World Congress of Families, has said that Hillary Clinton can’t be elected president because she is “profoundly ugly”

Predictably, the anti-gay wingnut right are crawling over each other to display their misogyny following Hillary Clinton's presidential campaign launch. 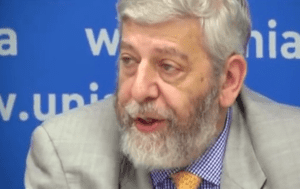 In a column on right-wing website GrassTopsUSA which also compares Clinton with Hitler, Feder writes that the Presidential candidate is “a frustrated, middle-aged feminist who's perpetually incensed” and looks frazzled and frumpy.

Explaining further, he argues that “bimbo” Clinton couldn't “win the a popularity contest if she was the only contestant.”

“The Hideousness Factor – Lyndon Baines Johnson was the last profoundly ugly candidate to be elected president, and he was a legacy of the martyred JFK. Voters don't want a leader who looks frazzled or frumpy.

"We're told that Lincoln was too homely to be elected president in an age of television and paparazzi. But Lincoln's homely face had a dignity, a gravitas. If nothing else, we want a face that reassures us, not one that scares us, a la Night of the Living Alinskyites.”

Last year, Feder was really irritated that Russell Crowe film Noah chose to not blame the flood on gay people.

Watch a video from 2014 in which Feder extols the virtues of WCF and explains why "the gay agenda" has ruined America, AFTER THE JUMP…